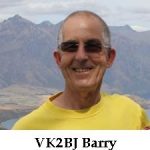 My association with Stockport Radio Society goes back to when I was 14 and still at school. That would have been around 1959.   In common with many youngsters in those days, I built a crystal set to listen to broadcast stations on the medium wave band.

I was living on Moorland Road, Woodsmoor at the time and whilst the crystal set worked, the broadcast stations were frequently overcome by a loud voice which I soon identified as being a local radio amateur.   I rode my bike around the neighbourhood and soon located some aerials at a house not far away in Great Moor. I knocked on the door and introduced myself and found that I was talking to Peter Reynolds,  G3NOA, whose voice I was hearing on my crystal set. In those days, Peter was operating on 160m and 40m AM.

I was immediately very interested after Peter showed me his shack and had some demonstration QSO’s including, I can remember to this day, one on 40m AM with F9EZ.   Peter told me about Stockport Radio Society of which he was a member and offered to take me along to the next meeting which in those days, and for many years afterwards, were held at the Blossoms Hotel.

I was hooked and soon joined the Society as a junior member.

I quickly got to know all the almost legendary figures at the Society at that time and these included Bill Banks, G2ARX (long time treasurer), Ray Phillips, G3FYE (long time secretary), Ernie Houldsworth, G6NM, Joe Cropper, G3BY, Des Alimundo, G4HK, Ernie Wigzell (eventually G8BMW), Norman Clark, G2BUC, Frank Armstrong, G3CNM, Ian MacArthur G3NUQ, Tom Hayhurst, G3NJE and Joel Weaving, G3OWW. Those are just a few of the names that spring to mind and sadly most are no longer with us.

I quickly learned that to get an amateur radio licence, you had to pass the City and Guilds Radio Amateur Examination and then the Post Office morse test. The RAE, as it was called, was only held once a year in those days but fortunately, Ray Phillips tutored an RAE class every year at Avondale School in Edgeley. I soon signed on to the next available course and succeeded at my first attempt. Ray was a very good teacher and had a high pass rate. However, the exam was quite difficult and required knowledge of electrical and radio theory as well as the licence regulations.

As regards morse code, my initial view was that once I had learned it to the required standard of 12 wpm to pass the Post Office test and gain my licence, I would never use it again. I was fortunate in having a former school friend, John Bell, who was at that time at the Marconi College in Manchester training to be a sea going radio officer. John had of course already learned morse and he persevered with teaching it to me with lots of nights of code practice. John ultimately got an amteur licence, G4HIU which he then changed to G0CMM and became an SRS member although he now lives in France.

In fact I quickly grew to enjoy morse and used to listen to it on the amateur bands on an old CR100 receiver (weighing about 100lbs) that I had by then acquired. As a result, I soon reached the required 12wpm and I remember going by train to Liverpool to sit the morse test which again I passed first time. As a result, I obtained my licence and call sign G3PEK in August 1961 when I was 16 and about six weeks prior to my seventeenth birthday.

While all this was going on, as well as A levels at school, I became an enthuiastic member of SRS and became friends with various other younger members including Ray Gerrard, G3NOM and Rod Weaving, G3NBN. Both of them were keen on and good CW operators and along with Ray Phillips, who was no less than a doyen of morse with his smooth sending at 25wpm on a hand key, I was introduced to contest operating and in particular National Field Day which was one of the highlights of the year for me. National Field Day in those days could form a long article all on its own but I won’t go into that detail here.

My association with and membership of SRS flourished and at various times, I was proud to be Chairman and Treasurer.   Particular highlights from my long association with SRS include winning the National Field Day Bristol Trophy on two occasions, both times whilst operating jointly with Ray G3NOM, and being in the five member SRS team (along with G3FYE and G3NOM) that won the Affiliated Societies Contest (at that time it was a CW only contest) in three consecutive years.

I moved to live in Chester in 1976 but maintained my membership of SRS and I used to drive over for meetings from time to time. I also used to enjoy taking part in the Sunday morning net on 80m SSB.   Whilst living in Chester, I was able to assemble a better station and aerial system and I developed a real interest in CW dxing and in the Commonwealth (BERU) Contest which I entered every year and which was always won by G3FXB as regards the UK entry. I also ha the opportunity of operating overseas on holidays in Cyprus and notably in the Seychelles in the early 1980’s where I was issued with the callsign S79DX which I used to good effect on CW.

In 1990 I had an opportunity of a move to Sydney, Australia with my then UK employer and the whole family – my wife Margaret and my two very young sons Andrew and David – moved to Sydney in May 1990. I quickly obtained an Australian licence on the strength of my UK licence and was fortunate – with a bit of help from a local amateur – in obtaining a prized two letter callsign, VK2BJ which is much better for CW and contest operation than a longer call.

We found a house in the residential suburb of St Ives which was pretty well suited for amateur radio and bought and moved into it in December 1990. We are still here although the house has been substantially renovated in recent years and this is an ongoing project.   I have a tilt over telescopic tower with a tri band yagi for HF, a rotary dipole for 40m and an inverted vee for 80m. I am fortunate in having a spacious shack/home office on the upper floor with large glass sliding doors opening onto a deck with views of the garden, pool and rear bushland. My current station comprises an Elecraft K3 transceiver built from a kit with a matching kit built KPA500 linear and a KAT500 automatic antenna tuner. I also have a TS590 and a TS2000 and I am looking carefully at the new TS990.

I am still as keen as ever on CW and the Commonwealth contest. My main paddle used with my electonic key is a stainless steel Begali Sculpture model that Margaret bought me for a 40th wedding anniversary present and I am again captaining the Australian A team in the forthcoming Commonwealth contest early in March.

I have always been fully supported in my radio activities by Margaret (notwithstanding her having been washed out of a tent by torrential in the early hours of Sunday morning during her first and only experience of staying overnight at NFD very early in our relationship) and I am enclosing a photograph of both of us taken within the last few weeks on a holiday in Queenstown, New Zealand. I am still working in the same line of business effectively full time (a loss adjuster dealing with insurance claims) and have a flight up to Bundaberg in Queensland at 0630 tomorrow morning to assess some damage from the recent very severe floods.

Thank you for giving me the opportunity of telling this story.