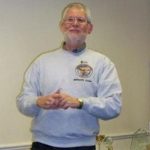 I was first licensed in August 1963 when I lived in North Lancashire.  Homebrew HF CW transmitter with an old CR100 receiver, 20m ground plane and a 400 ft long wire kept me busy with the old RAF morse key.  An old Creed 7B teleprinter saw early activity on Digimodes.

My work took me to Manchester so I moved to Poynton around 1976.  With work and family being the ocus of my time for some years, I eventually joined  SRS in the late ‘80s at their Dialstone Lane venue.

I was persuaded to join the SRS committee and some years later became Chairman for a year until my work took me to Liverpool c.1998.  SRS was meeting at TS Hawkins at this time.  I was again persuaded, this time, to be SRS Treasurer prior to our venue moving to Bramhall Air Scout HQ and then eventually onto Walthew House.

While at Bramhall I enjoyed supporting both Bramhall and Poynton Scout Troops with their ‘Jamboree On The Air’ events and subsequently, when their interest waned, I supported JOTA at the Linnet Clough Technology camp for a few years.

My interest in CW Contesting saw me supporting the SRS AFS, NFD and SSB FD events.  Around 2008 I was involved with the setting up of the G5O Contest Group, a subset of SRS activities, based at Common Barn Farm where maintaining and developing the station takes up more time than the contesting.

With the introduction of the 3 Stage Licence structure I’ve been involved with other SRS members running Foundation, Intermediate and Advance Courses since c. 2002.

My main interests are still HF, CW and contesting though construction, digimodes and now Software Defined Radio distracts me into some of the many other fascinating aspects of a hobby that I will never exhaust.