A popular event on the SRS calendar, having missed out in February we were pleased to make a return visit to the aviation memorabilia fair taking place once again at the Runway Visitor Park, Manchester Airport.

With many still tucked up in bed, Neil M6NAE and his co-pilot Bill M0WDS, our advance party were knocking on the gates of the viewing park early on Saturday morning. Eventually just after 6.30am the gates swung open and our event began. With the remainder of the team soon arriving, minus Evan apparently still in the land of nod, work began to erect and decorate the marquee which was complete in a jiffy.

The park opened to the public at 8am with a steady stream of visitors many of whom stopped by to see what we had on offer prior to joining the queue to enter the show. Stopping by were members, radio/aviation enthusiasts and members of the public but particularly pleasing was the opportunity to “share and compare notes” with Geoff G0BJR, President of Oldham ARC and John G7OAI from our counterparts in Rochdale who were visitors to the event.

We decamped around 4pm storing our gear in the adjacent training rooms in readiness for another early start on Sunday which came all too soon.

Sunday duly arrived with Neil and Bill once again leading the way but this time the weather had changed and whilst the sun shone for a time, the wind had picked up leading to some discussions regarding position of the marquee. After some time the decision was made and work began to once again erect and dress our home for the next few hours. This time our numbers had been bolstered by the arrival of Evan M0TJU who’d been collected by Tony M0SAV and Nigel M0VNL.

In a replay of the day before once again we were pleased to welcome a steady stream of visitors, however, the weather was going to deal a blow with a regular stream of showers turning to a more prolonged spell of rain which accompanied by a strengthening breeze made dismantling the marquee challenging. This was achieved and with the clock chiming 4pm we were on our way home with another successful event under our belts.

The focus of this event was to interact with the public and visitors to the fair, however, there were opportunities to operate with Neil leading the way with his digital setup making a number of contacts on Saturday, then 2 Metres with the addition of a VHF/UHF mobile rig on Sunday.

As for the fair, well by all accounts this was another success with plans afoot for similar events in February and July 2023. Similar in setup to a radio rally, the event attracted traders and visitors from all over the country as well as overseas. All kinds of aviation memorabilia were on offer from logo’d sick bags and towels to aircraft windows turned into framed art. Of course the big attraction was the event being held in the shadow or Concorde “Alpha Charlie” with at least one of our number, Evan M0TJU being unable to resist the temptation to take a tour on board.

Despite the varying weather conditions, the Runway Visitor park was very busy with aviation enthusiasts from across the north adding to the local general public all there to watch the regular stream of aircraft movements. On Sunday, the attraction of two returning Premier League Football Teams using chartered aircraft, one a Boeing 747 “Jumbo Jet” added to the interest and no doubt numbers attending.

Finally, for us we came away having secured good relations with the event organiser, The Aviation Society, other local charities attending (Bloodbikes and RNLI), Airliners Live, plus the representatives of two local radio clubs. Success indeed.

We’re already looking forward to a return visit in February, in the meantime next on the agenda is the “Wings and Wheels” event down the road at Heritage Centre, Woodford and we look forward to seeing you there. In the meantime, thank you to all involved and those who visited. 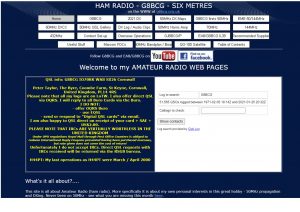